Louis has asked me since he was about 3 years old if I will teach him to sew. And the formula in my mind was:

So I held off for a couple of years. He was content finding little objects to stick to the magnetic pin bowl, cutting fabric scraps with thread nippers, and "adjusting" the sewing machine tension until a few days ago. He asked again if I would teach him to sew, and, being the mom who always tries to find a way to say yes, I said yes.

Couldn't I make it safe to sew up a few mini pillows together for his action figures?

We went to the scrap basket and pulled out a few scraps of Louis' choosing, I cut them into small rectangles, marked a sewing line on three sides with the blue fabric pencil, and we hit the machine. Louis LOVED controlling the foot pedal and steering the fabric, watching until we'd sewn to the end of a blue line to stop sewing, lifting the presser foot, turning the fabric, and continuing the stitch. His favorite part: cutting the threads with the thread nippers. He stuffed his little pillows and we sewed them shut. And after we'd finished three pillows, his action figures had a pillow fight. 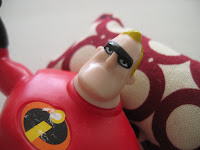 And then Mr. Incredible settled in for a nap.
Posted by Antoinette at 4:45 PM